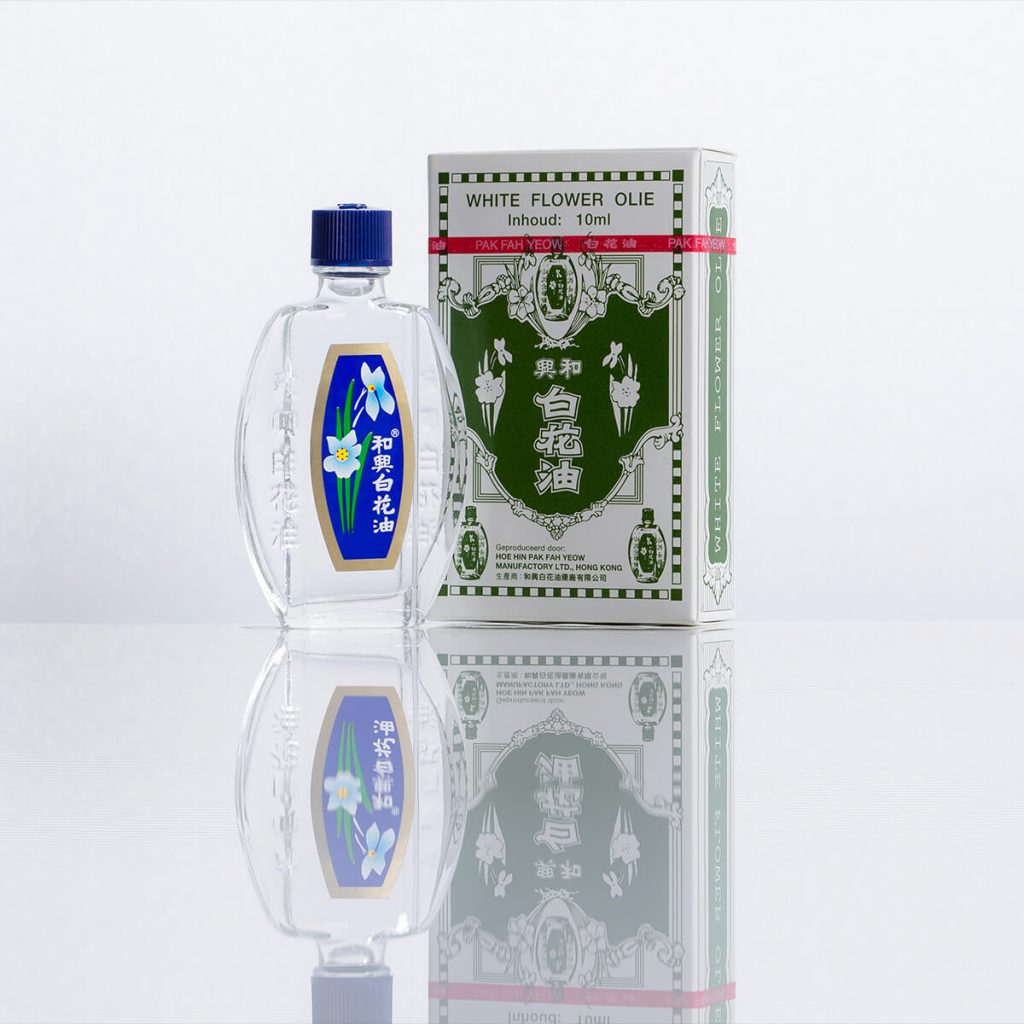 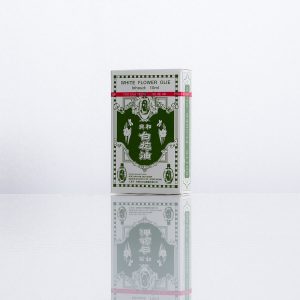 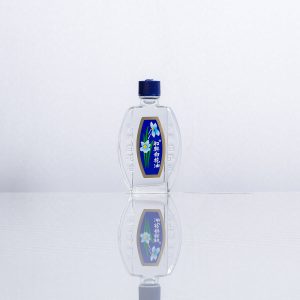 Applications
Refresh the body, relieve skin and muscle discomforts and stimulates blood circulation. Serve for body care in case of physical exertion and tension in general.

Directions
Avoid any contact with the eyes, mucous membrane and open wounds. Keep out of reach of children.

Ingredients
White Flower Oil, commonly known as Pak Fah Yeow or White Flower Vitalising Oil, is a blend of several essential oils including eucalyptus oil and lavender oil. Most ingredients containing natural elements are imported from France, China and Australia, and purchased in compliance with the specifications set forth in British Pharmacopoeia or Chinese Pharmacopoeia.

(The product is available in Holland. The product packaging and formula are subject to the local import regulations and law requirements.)

THE LEGEND OF PAK FAH YEOW

The legend began in Penang – Malaysia, in the late 1927 when the founder, Mr. Gan Geok Eng first developed the medicated oil of White Flower Embrocation, commonly known as Pak Fah Yeow – literally meaning “White Flower Oil”. The product, which was named after his favourite flower – the white “Narcissus” daffodil, was initially developed for private use.

However,the medicated oil proved to be so popular with family friends and acquaintances that Mr. Gan decided to produce it on a commercial basis and offer it for general sale. The trademark relating to White Flower Embrocation was first registered in Singapore by Mrs. Gan Low Khoon Choo in 1935.

Following the initial success in Singapore and Penang, Mr. Gan decided to enter into the Hong Kong market in 1951, seeing it as both a potential major market and ideal manufacturing center with its numerous Chinese inhabitants and readily available labour force.

With a series of remarkable marketing campaigns, including extensive outdoor advertising which was unique in its day, endorsement by well-known Chinese opera actors, and active participation in the Hong Kong Chinese Products Exhibition (Industrial Trade Fair), White Flower Embrocation successfully began to build its market place. 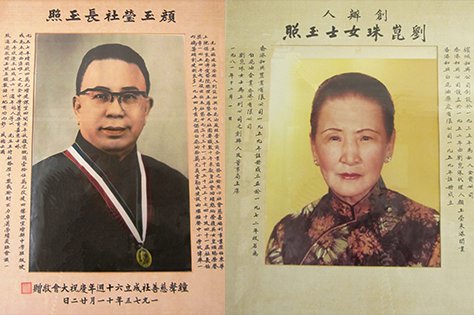 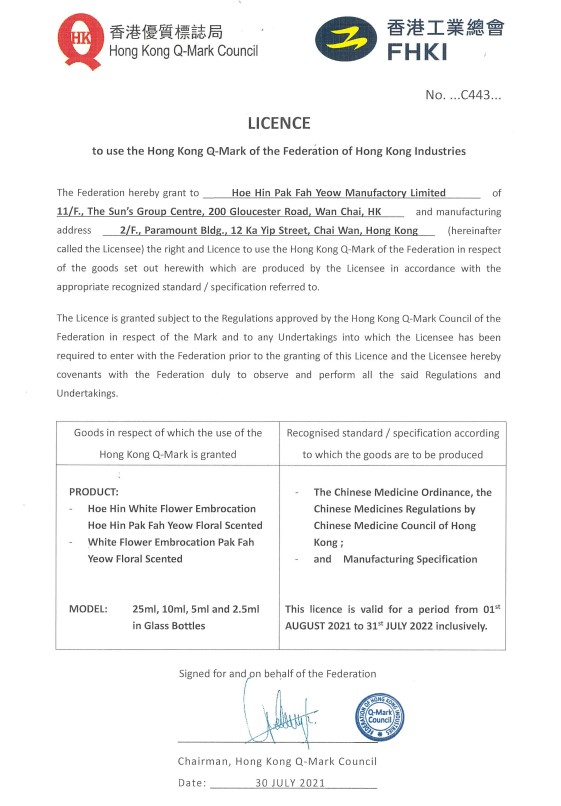 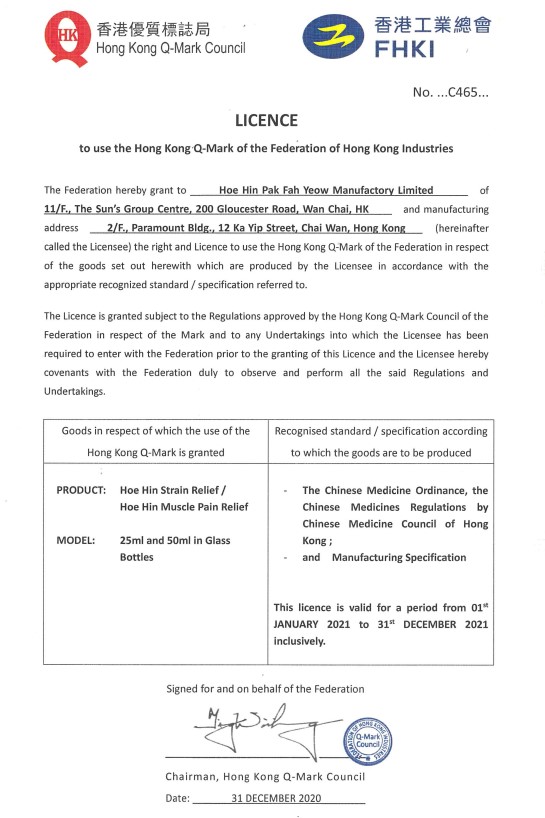 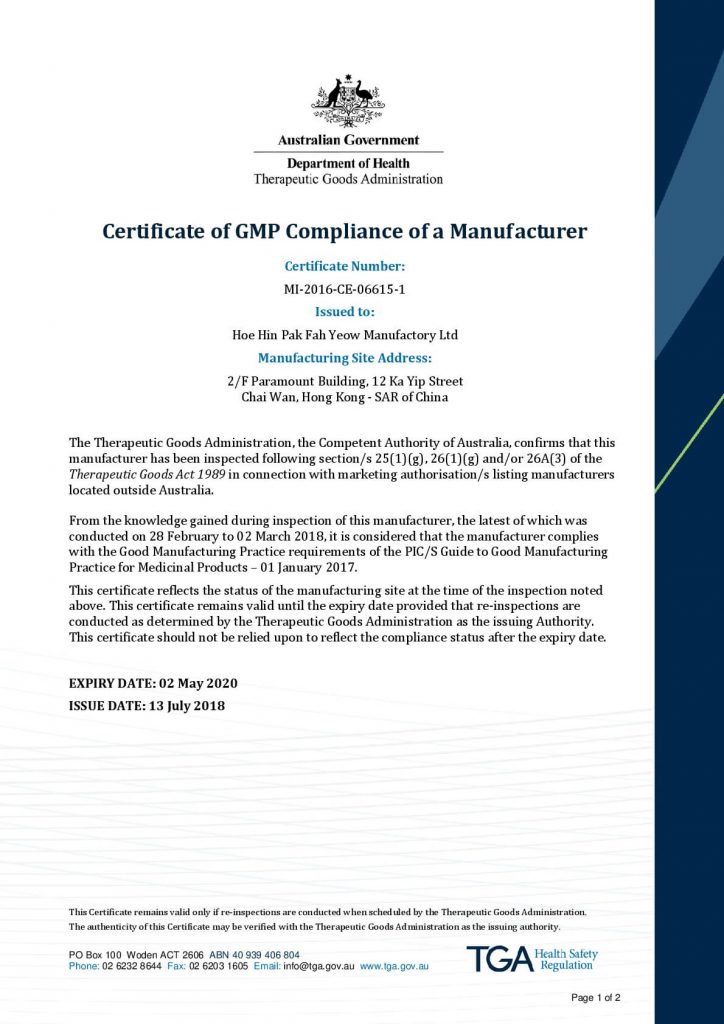 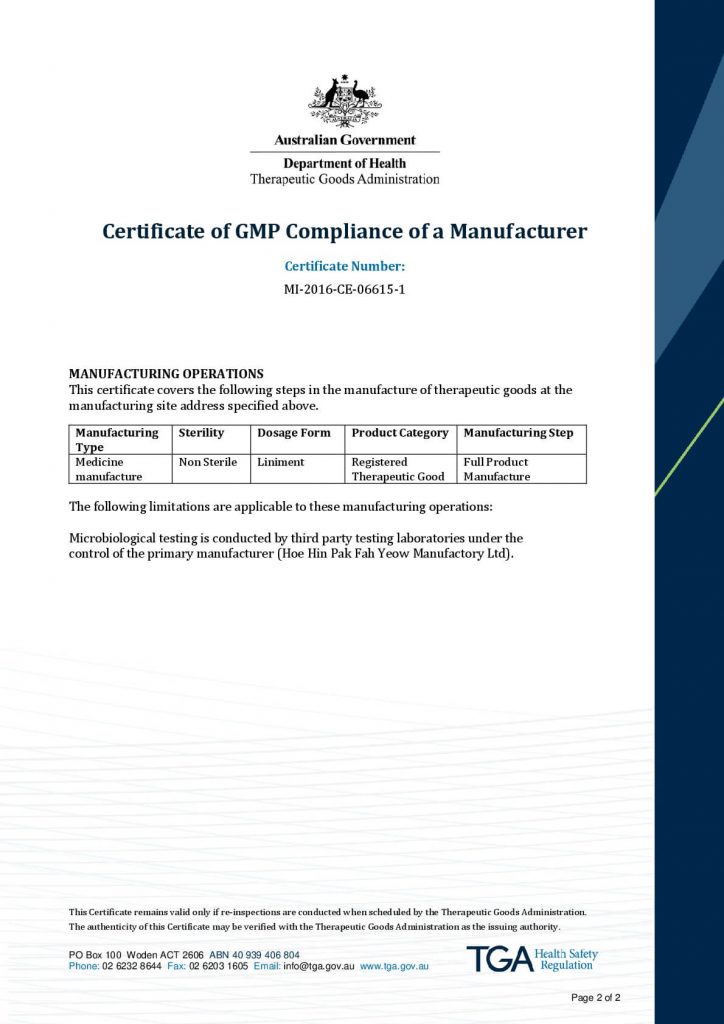 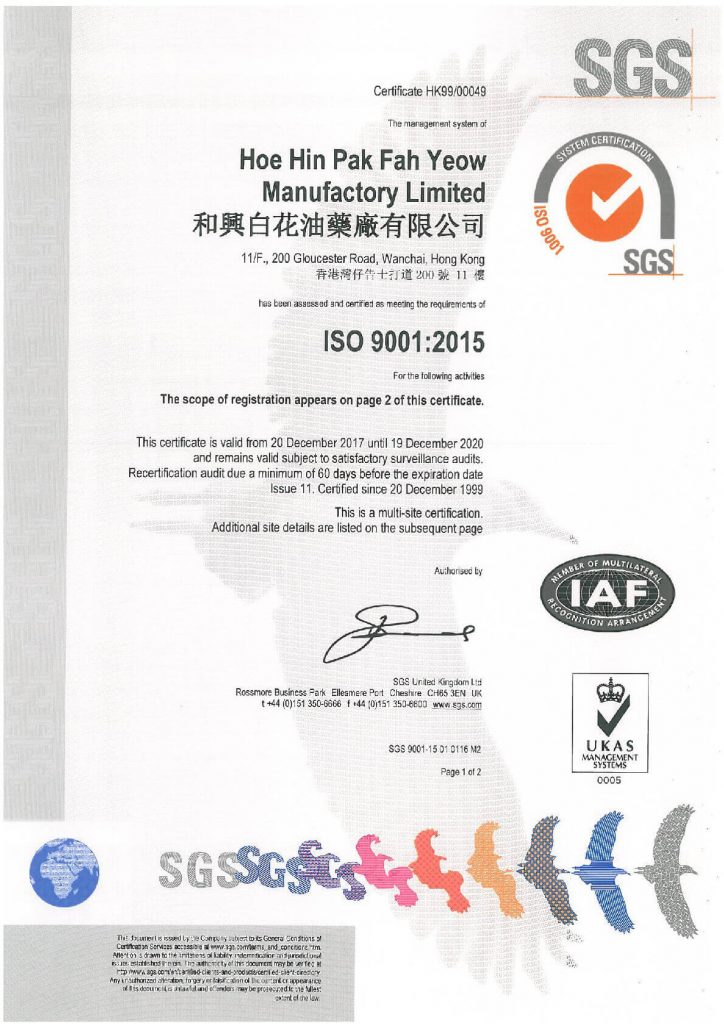 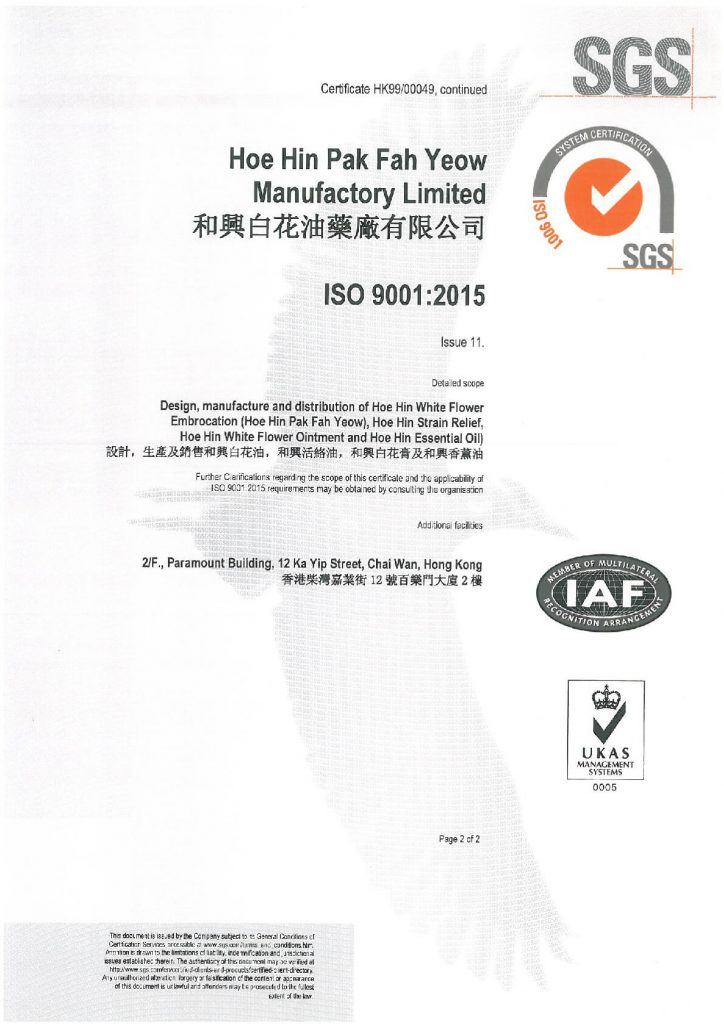 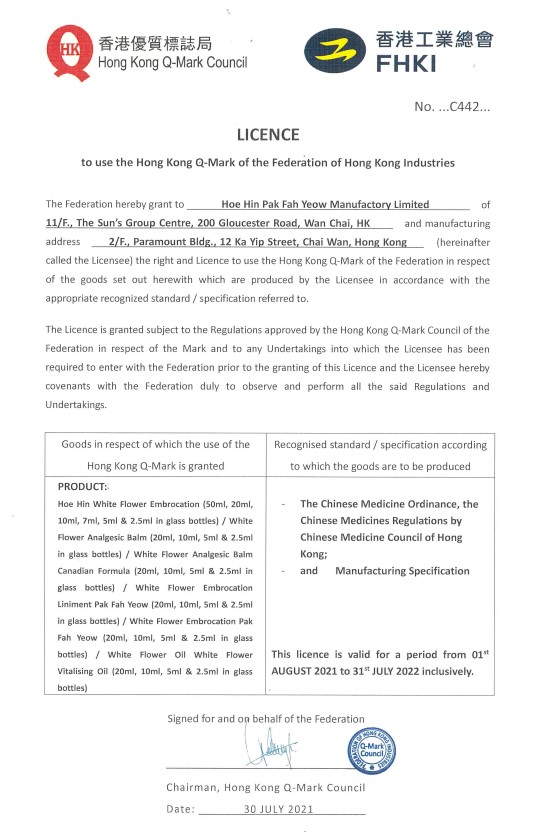 In order to ensure competitiveness due to the dynamic and ever changing environment, the Company has identified the need to continuously monitor and improve the quality of its products. As such, strong efforts are in force to establish a quality system, based on requirements set forth by the ISO9002: 1994(E) and subsequently upgraded to ISO9002 (certified in 1999) and ISO9001:2008 (certified in 2010). Since 2010, the Company has continuously improved in its quality system and ISO certification with the latest upgrade to ISO9001:2015 certificate in 2019. The core of our quality policy is based on providing quality and reliable products including premium items carrying corporate identity, exceeding 90% on-time delivery service and our commitment to civic responsibility.

The Company was first awarded the Good Manufacturing Practice (GMP) certificate issued by the Therapeutic Goods Administration from the Department of Health in Australia in 1996 and has maintained such certification throughout.

Furthermore, the Company received the Hong Kong Q-Mark certification for its White Flower Embrocation and Hoe Hin Strain Relief products in 2000 and 2002 respectively as recognition for excellence in product quality. The Company has been continuously awarded this certificate annually. Following this, the award of Good Manufacturing Practice in respect of Proprietary Chinese Medicines (GMP-pCm) granted by the Chinese Medicines Council of Hong Kong was received in 2006 and such certification has been continuously renewed.